Prague’s housing estate Skalka is situated at the border of Strašnice City District. The estate was built at the beginning of seventies on a site with modest slope which was originally dedicated to an urban structure similar to the one in surroundings. In the centre of the estate is located a metro station followed by a bus terminal which has lost it’s importance due to new metro stations openings. The main traffic road is not unbearebly busy, however it divides the whole area into two more or less independent parts. The key spatial factor represents a high voltage conduction running in the middle of the area. Its’ protection zone generates a vacant green strip containing places partly used by inhabitants as well as neglected parts overgrowing with bushes. Upcoming land use plan counts with the conduction removal – that could therefore accelerate a new development in the metro station surroundings. Area: 41 ha Inhabitants: 4 200 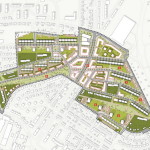 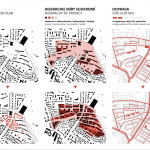 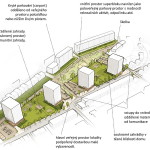 Housing estate Černý Most has been built on a former agricultural site since 1985. The original concept was fulfilled up to realization of housing blocks and schools, other civic amenities, such as cinema or cultural centre, weren’t built. The idea of the estate was based on a vision of living in the greenery, open space surrounding the structure and separation of transportation modes. That derives a lot of problems we are dealing now. As the most pressing problem is considered to be a lack of parking lots as well as redundancy of the greenery which is unsustainable to maintain. The mono-functionality of an urban layout is also an issue inhabitants are trying to solve by themselves – by starting randomly located micro-businesses. Since 2000 the estate was partly extended and completed – especially round the metro station. However, the existence of small enterprises is still in danger due to a huge shopping mall in close proximity. The shopping centre substitutes the lack of amenities at the estate but it also blocks its’ development in the streets of the neighborhood. Area: 74 ha Inhabitants: 12 500 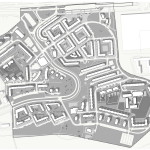 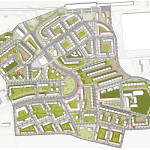 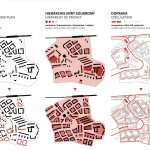 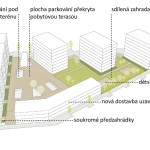 Housing estate Modřany is situated on the south-east periphery of Prague. It has been built during the most significant period of Pragues‘ housing estates development in the second half of the seventies. Housing estate was built in close proximity of prewar detached houses on a former meadow site with path linking Modřany and Libuše. The site is bordered by forested ravines from north and south. Two other streets define the area – Československého Exilu and Generála Šišky. The character of these roads is much more similar to a highway access instead to a city street. Huge vacant places fringe these roads and serve as a high-capacity parking lots. Several housing blocks are being built along Čs. Exilu road actually. Following sites where the development might be expected are vacant places of parking lots and former central boiler houses on the opposite side of the crossroad. As a main public space is considered Sofijské náměstí whose character however doesn’t follow its significance. In this place should be also situated a metro station of line D in the future and therefore it’s possible to treat it as a prospective centre of City Prague District 12 which practically doesn’t exist right now. Area: 35 ha Inhabitants: 4 480 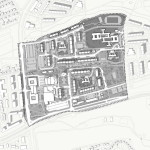 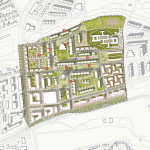 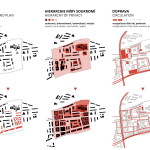 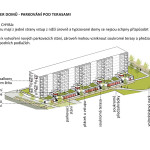 Housing Estates Růžový Vrch stands on the hill, above confluence of Ohře and Teplá river, in close proximity to main railway station. The nearness of the Karlovy Vary city centre is suppressed by barriers of railways, highways, the slope and the stream of Ohře river. The estate was built in the sixties and replaced former blocks of houses which were bombed during WW2 by allied army. Fragments of the original urban structure are still legible. The road recessed below the ground level divides the whole area into two parts. Buildings in the western part respect the original blocks layout, whereas the eastern part follows the modernist ideas. Both parts are connected by a footbridge adjacent to a small shopping mall. Each part has also its own centre represented by a small square with pubs and shops. During its construction, housing estate was well equipped with civic amenities and the sovereignty of the area was therefore affirmed. However, most of the amenities today is in a very bad condition or underwent unsuccessful reconstructions. Due to its diverse history, you can find there various places with specific local names which are linked to stories and tales that strengthen the relationship of inhabitants to the neighbourhood and give the place a feeling of a small town. Area: 21 ha Inhabitants: 2 800 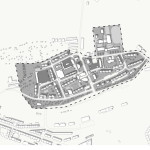 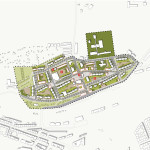 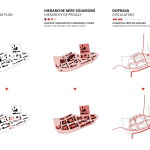 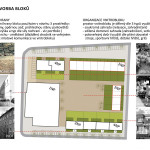 Construction of housing estate for arms factory employees dates back to the seventies. Location was chosen at the south-eastern slope of Sychrov neighbourhood in close proximity of Upper City, former and historical city centre. The urban layout was originally designed with detached houses and 4-storeys buildings, however in between 1978 and 1983 only four and eight-storeys T06B prefab buildings were constructed and insensitively scarred the townscape. The development of the area was accompanied by demolitions in the city centre and by realization of ring road, which requested further demolitions of historical buildings right on the Upper City square. Building interventions in Upper City slowly led to its degradation. From originally planned 4500 inhabitants, 3100 is now living at the estate. Civic amenities is mostly abandoned and neglecting. Housing estate itself deals many more problems. The most significant is the morphology of the area which reduces traffic system only to one blind alley. The traffic, the estate and its relationship to the historical urban structure represent main issues to be solved. The Vsetín potential lays mainly in current buildings renovations. Another positive aspect of the area is the nearness to the city centre as well as to the  countryside. Area: 39 ha Inhabitants: 3 790 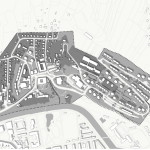 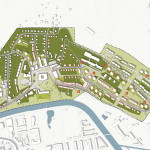 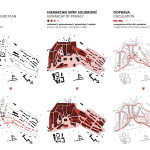 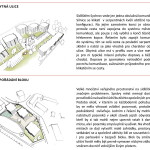 Housing estate Rozvoj is situated eastwards from the historical city centre, on the very edge of the city. City blocks grew radially since the 19th century. The rim of this urban structure is still legible in fragments (solitary houses) in the western part of the estate. The "L" shaped development next to the city blocks was built on a former meadow at the beginning of the sixties. It's significant with its clear line structure of six to eleven-storey high prefab houses. The eastern part with eight to twelve-storey buildings and school was built during seventies and eighties, however without any clear concept or layout. Later, it was followed by line of huge shopping malls which do not represent an adequate city entrance image. From the North, the estate is bordered by small-scale industrial zone and newly built highway followed by Škoda cars' factory. From the South, the estate is enclosed by Jíčínská road leading to the city centre. From Jíčinská street it is able to access Štěpánka forest park, the main recreational zone of the city. The biggest potential of the area is its' location at the city border in proximity of highway, the nearness of the greenery as well as the  city centre and also the possibility of brownfields urban renewal. Area: 31 ha Inhabitants: 2 200 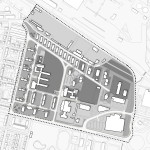 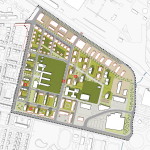 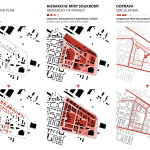 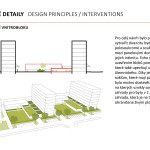